As the saying goes "It takes a Village to Raise A Child" has never been ringing true to me till this day. Looking back in the amount of work getting back to upgrade my skill to be relevant for the local startup scene as a developer in Singapore. Devouring endless amount of youtube video, books, podcast, and Udacity React Nanodegree one bite at a time has helped to shape me into who I am now.

I think it might make sense to put it here as if there wasn't anyone like them creating technical content has helped to be my mentors to guide me on what I know now. People like Justin Michel from Coding for Entrepreneurs, Chris Hawkes in Chris Hawkes, Brad from TraverisMedia with lastly Daniel Roy Greenfield & his wife Auredy Roy Greenfield for Two Scoops of Django helped a lot while I am stumbling to stand up.

I recently read a comment on one of my favourite Youtuber "CodingForEnterepenuers" by Justin Mitchel that talk about us sharing our coding journey. His story was why I wanted to create this article. Which is really inspiring and awesome 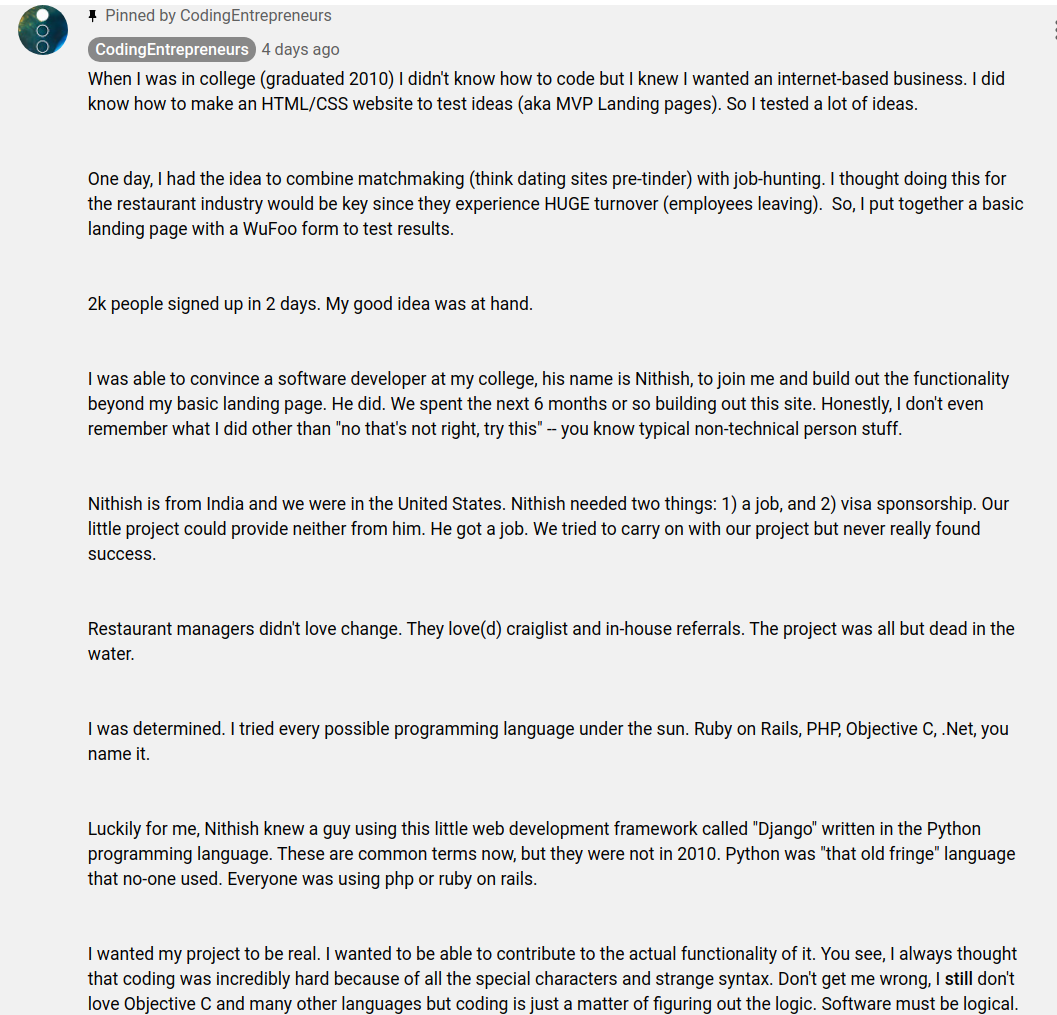 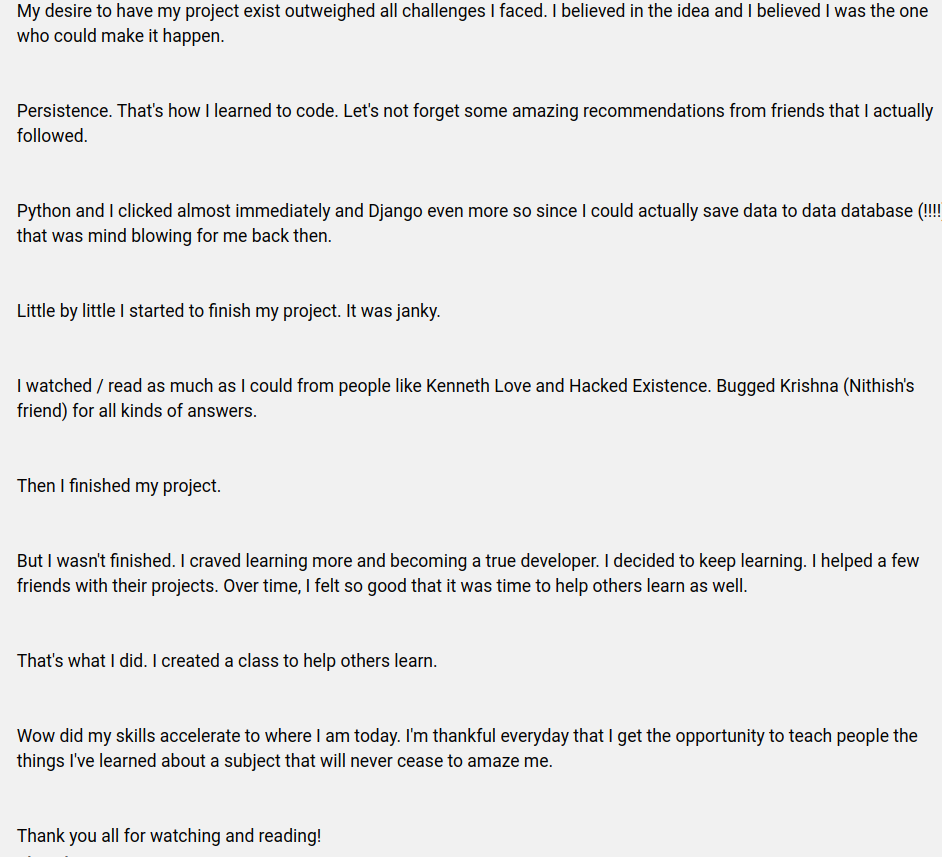 He shared his story on being really sick and tired of doing blue-collar & white-collar work he has been doing. At 28 years old he was watching a concert called "Bayside". That he decided to become a programmer. I added a video called The Hard Path to Being A Programmer on his authentic & down to earth vibe which had attracted me to him.

My Own Transformation Journey

Feeling I Can Not Make It As a Developer

I graduated with a CS degree from my university about 4 years ago. I felt that I was useless in programming. I thought I could not make it as a professional developer. After I had graduated and I wanted to be part of the startup world.

So I start off as a technology salesman in EdTech startup, I didn't like it due to the lack of mentorship and guidance that I quit in November 2016. In 2017, I was stumbling from building my own startup, managing a co-working space & creating a learning circle to funnel people to the co-working space.

My Mentor Giving the Hard Pill to Swallow

In 2017, My mentor Kenny who was a veteran in the local startup scene previously was doing job placement for mid-career switchers into startups. He gave me an intervention to pursue a career path as a developer due to my education background. Which was much easier for me than his candidates who wanted to become a developer. So he gave me 3 options to pursue instead of wasting my time and being in menial jobs:

In the end, I chose the last path while upgrading my skills that are relevant to the local startups in Singapore.

I lucked out when I had a chat with a freelancer in the Python User Group. Who was CTO in a local art marketplace startup that has a lean team of 10 that is equivalent to 30 developers in a similar startup. The bulk of them came from a gaming development background. Which he trains them to use Django from scratch.

This made me think if I learnt Django, I become a Force Multiplier doing work that is equal to 2 or 3 people. Won't it be much easier for me to command a higher salary because of it? Then I borrowed the book "Two Scoops of Django" from a friend which she brought it directly from the author who came to Singapore for PyCon previously.

I used it as part of my study while I was watching various YouTubers to learn about Django. Within a 1 or 2 mths, I was able to secure an internship with a local startup as a Full Stack Developer which I stayed for 2 years.

Now I just recently turned 30 on 22 April which is known as Earth Day. I had started my own personal blog and built a following of almost 35k followers on Dev.To and almost 200 on Codementor.

I am doing freelance work for Startups and pursing my own startup journey with my business partner. Being one of the community leaders for JuniorDevSG, Python User Group Singapore, MentorsHub Startup Interest Group. Daily I am constantly learning more and challenging myself.

To become a better blogger, a developer, freelancer, an entrepreneur, coding mentor, community leader in the community. While living my own purpose in life as a Life Enhancer by blending both technology & entrepreneurship together.

I hope this will be useful to you in your own developer journey. I believe the only option for you pursing in your developer career is being persistent. Having the willingness to work hard and smart on yourself to take risk while fulfiling your own purpose in life.

You must find a way to be surrounded by a bunch of people. Who is smart with tons of heart that can challenge on your own reality and bring you to operate on a higher level than what you are now to grow as a person.